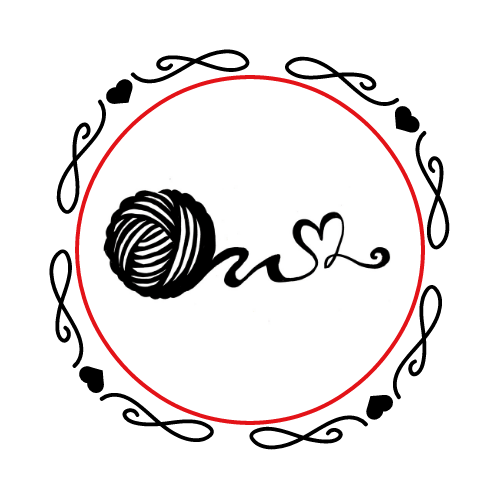 “Here at Musea we seek to create a space where our community can forge a path illuminated by love being at the center of our choices. ”

In this week’s Member Zine, we are introducing our new monthly relationship inquiry on the topic of COMMUNITY. In our member letter, Amber Gould, offers an intriguing reflection on the ways in which a mycelial network is a good metaphor for how community works, inviting us to consider how we are shaped by and contribute to the shaping of our chosen or inherited communities.

Use the jumplinks below 👇🏽 to Choose Your Own Adventure 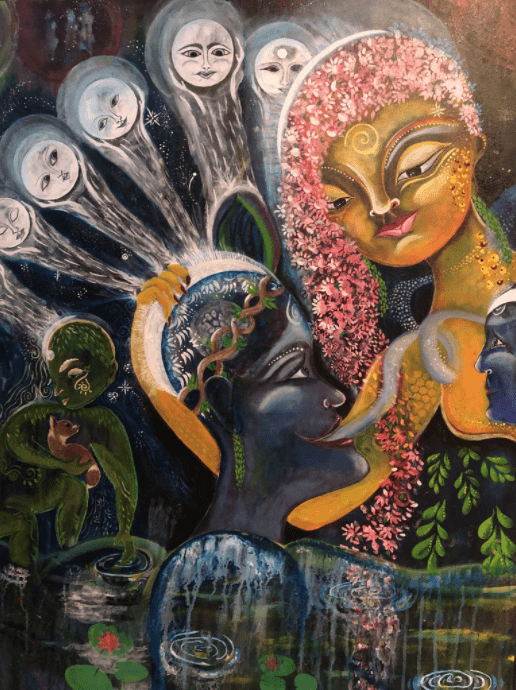 An Auspicious Imbolc on the New Moon! 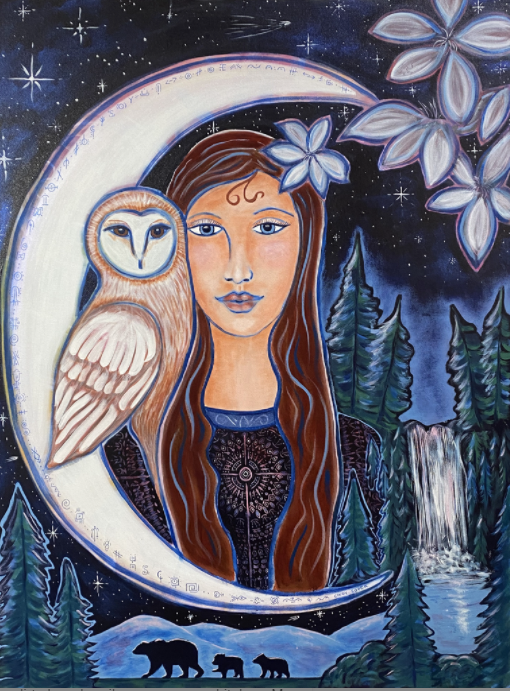 Happy New Moon and a beautiful Imbolc to all our readers. For those who aren’t familiar with Imbolc, it is a traditional Gaelic festival falling about halfway between winter solstice and spring equinox to mark the beginning of the return of more daylight to the northern hemisphere. For Christians, it’s the feast day of Saint Brigid also known as Saint Brigid of Kildare, or patroness Saint of Ireland. She was a nun and abbess who founded several monasteries in Ireland and people believed that God performed miracles of healing through her during her lifetime. She is considered to be the patron saint of many including poets, babies, midwives, scholars, and travelers (especially those who traveled by water).

Born as an enslaved person in c. 451 in Kildare, Ireland to a mother who was also enslaved, it is thought that she was treated quite poorly during her early upbringing although in spite of this, she was known to have become extraordinary kind and generous even as a child with such acts as giving away all of her food even when she was starving herself which was one of the many virtues she became known for throughout her life.

This year on February 1st & 2nd, a new moon coincides with Imbolc making it considered to be a particularly auspicious time. The deep history of traditions across many religions, groups, and eras throughout civilizations to gather together for communal celebrations in honor of the moon cycles is vastly rich including the Lunar New Year as celebrated by over 1.5 billion people in east Asia.

Did you know that honoring the moon is also one of the ways Musea supports connections throughout our own community?

For several years, Shiloh Sophia has offered a year-long course where participants work on large canvas paintings as they progress together throughout the year; the painting steps planned to coordinate with each New and Full moons of the month. This year’s course is Maverick. We may not be able to join together to dance under the moon, but we can connect with one another as a global community through our painting processes to honor her and ourselves through Intentional Creativity. If you celebrate Imbolc or have special moon rituals that you would like to share with the community, we invite you to post about them in the iMusea app.

The Mavericks are Going Rogue!

As we mentioned the yearlong MAVERICK painting class that follows a 13-moon cycle, we wanted to share some highlights of our member’s paintings in progress from within the MAVERICK container, as we believe this is a great reflection of how our art community is a very special place to be! We have some some wild and wonderful images coming through and it seems the Muse is really speaking!

It is sometimes a unique and worthy challenge to communicate to those new to Intentional Creativity just how potent and powerful it can be to join in a communal experience of painting together. Within these yearlong, many moons painting journeys, there is a unique kind of connection, camaraderie, and group identity that forms for those who commit to being on the journey together. As we share our individual process and receive witness from others in the group, many experience a sense of being deeply held, seen and validated that is very healing. Often this comes as a surprise, just how woven together we can feel within these intimate, brave, and whimsical painting containers. We get to have fun, dive into the deep end, turn up the volume, dance it out, show and tell, reveal our secrets, embody our muse, and PLAY together. Bonds are formed. Intricate, unique connections in the web turn up where we least expect them!

Enjoy these images and story highlights – a fascinating peek into the collaborative ‘field’ shared by those in the MAVERICK community painting experience.

“I am my own muse. I am the subject I know best.
The subject I want to know better.”
― Oroma Elewa 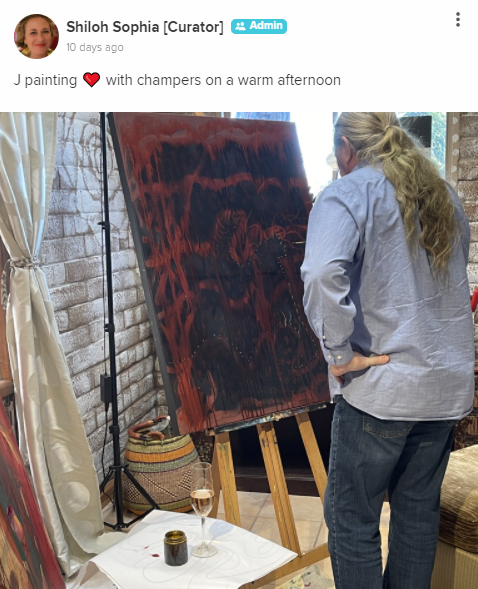 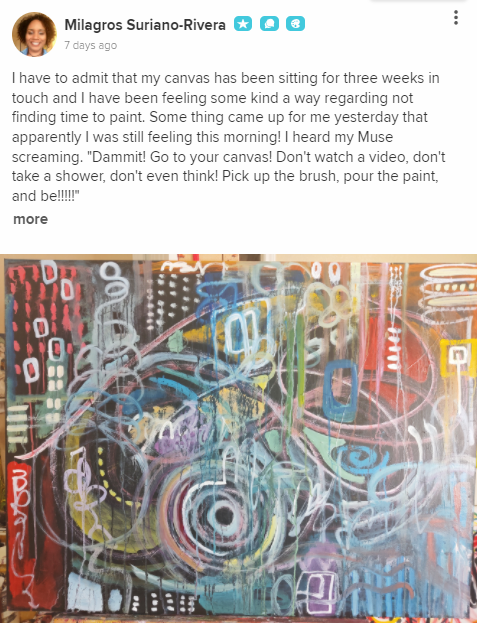 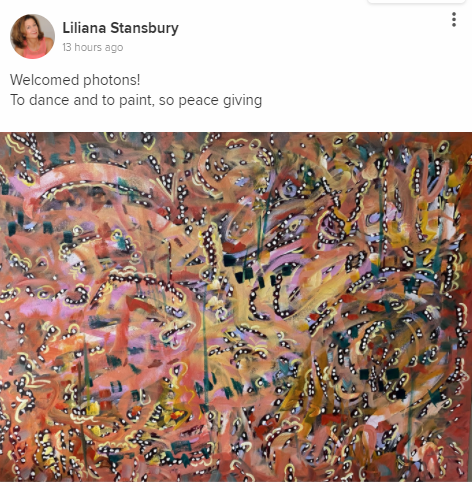 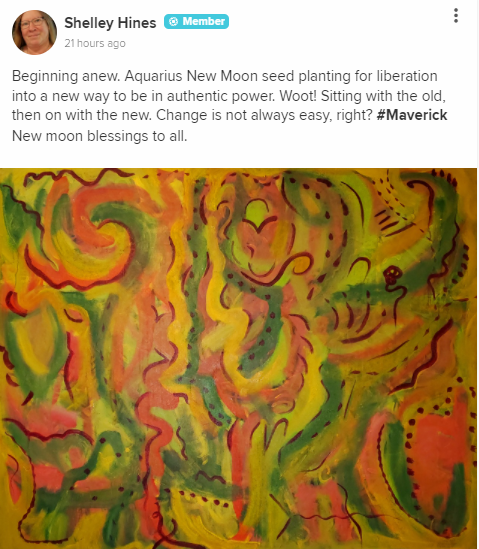 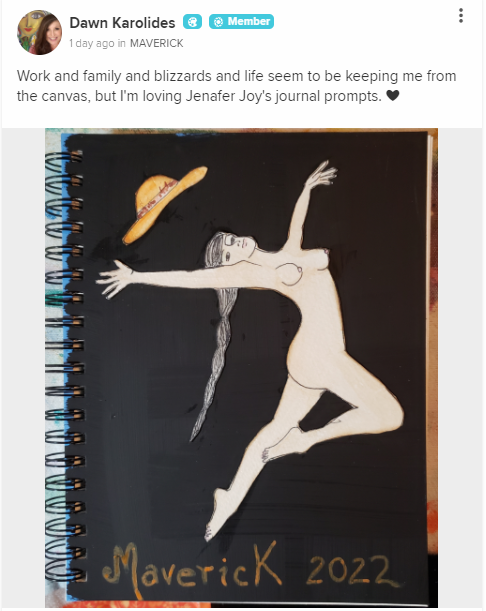 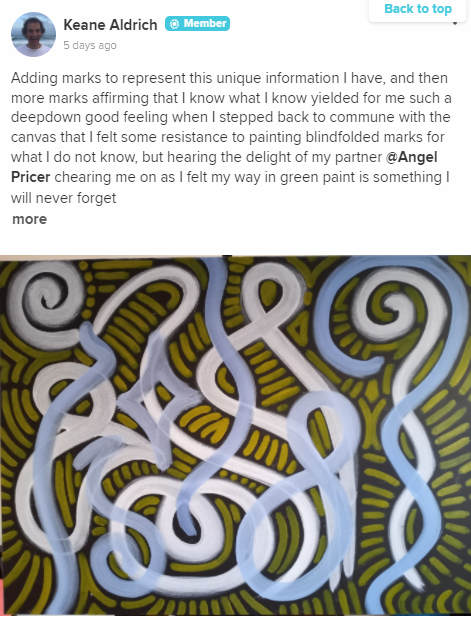 Celebrating the ‘moving’ multimedia art in our membership community! 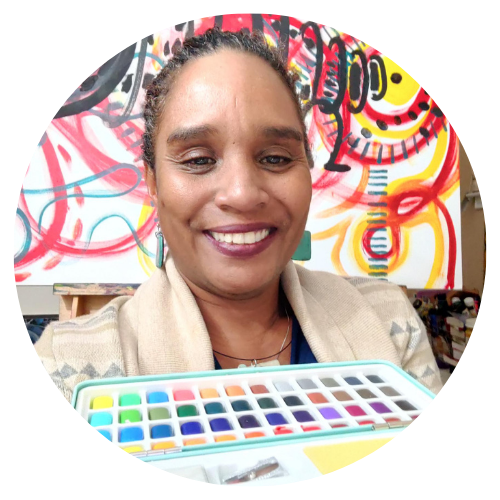 Today Milagros is sharing a demonstration of our Monthly Thematic Inquiry and Art Journal Action on COMMUNITY! In this video Milagros is working in her watercolor journal, creating a special page of beautiful color and markings in which to work with the inquiry “What does my chosen community reflect about me?” We encourage all our members to work with this same inquiry on COMMUNITY found in our Relationship Inquiry Card shared below as well as in the All Member Portal (where you can print it off and glue it in your journal if you like!) 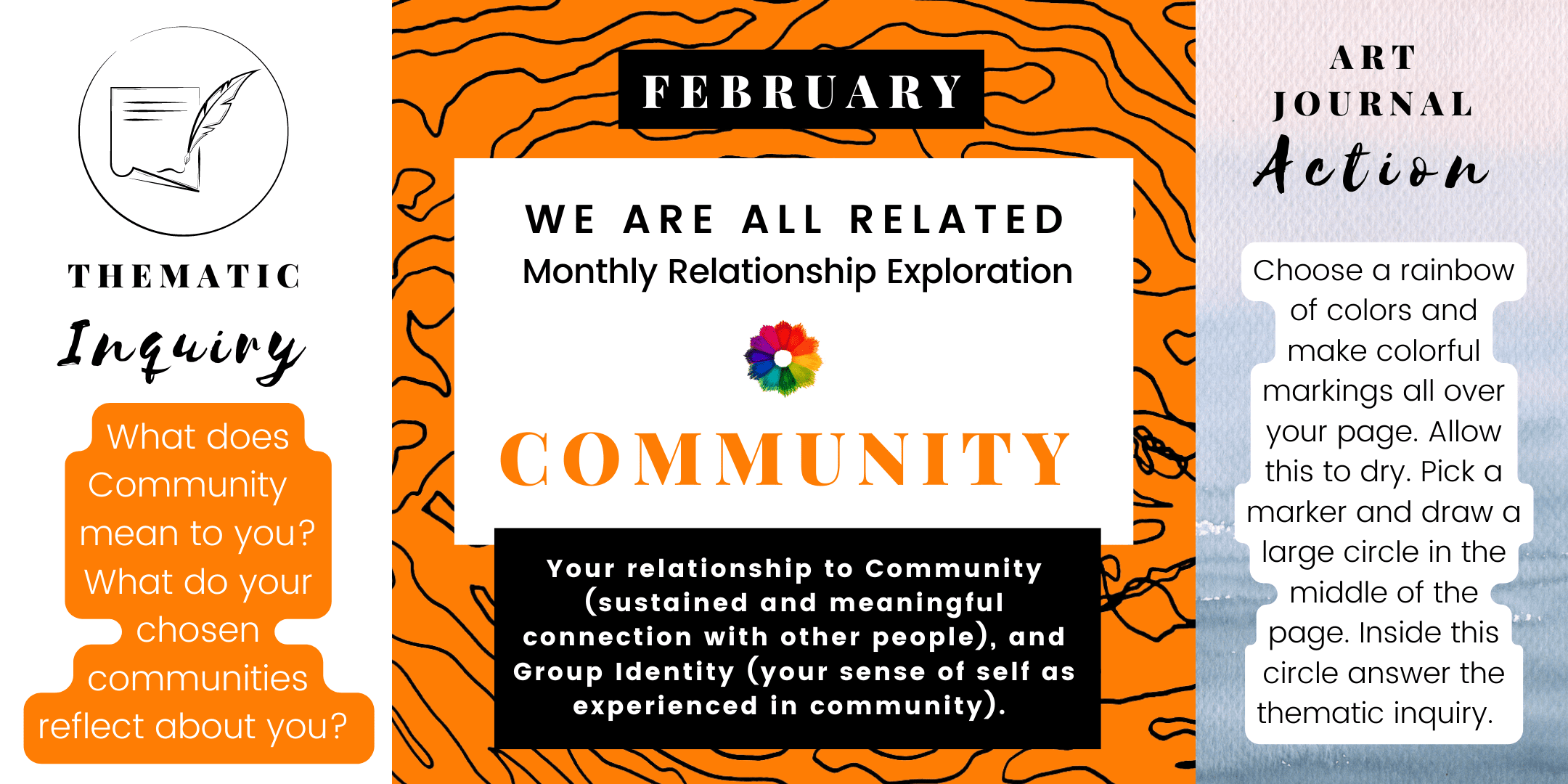 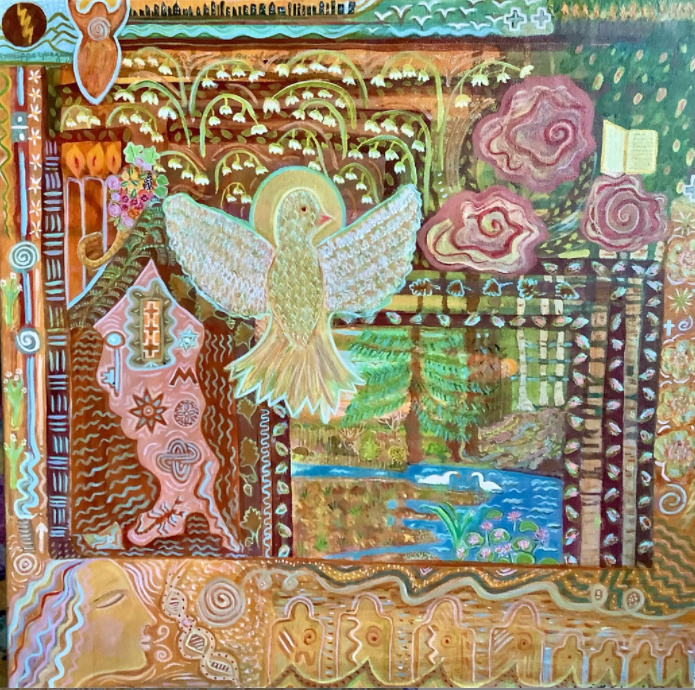 Examining our Relationship to Community 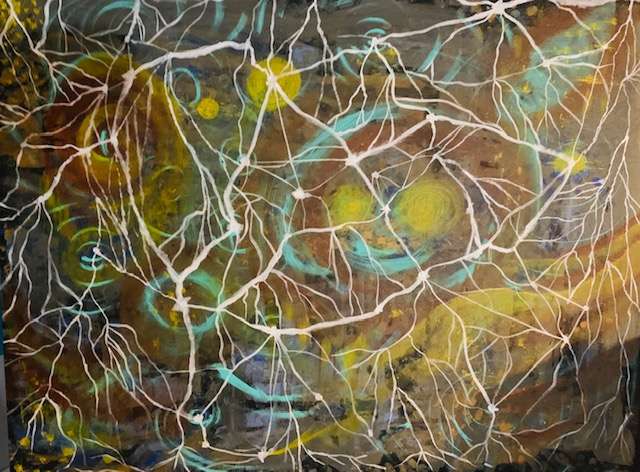 At Musea, welcoming people into community and a deeply felt sense of belonging – all valuable differences included and honored – is a primary part of our mission. We believe that each person is held up, maintained, and fortified by an intricate web of relationships. This web of relationships, or you can call them ‘many communities’ shape who we are, sustain our bodies and wellness, and generally make life more beautiful and meaningful!

This weekend, spending time in my studio painting on my MAVERICK canvas, I found myself in a trance-like moment painting the networked pathways of an intricate mycelial network. A mycelial network is a vast, expansive and constantly growing underground network of fungal strands that link up, communicate, and send information as well as nutrients to the plants and trees that they are attached to. They are the building blocks of our planet – predating nearly all plant life – and they hold our soil and forests together! Looked at up close, they also resemble the neural networks and pathways of the brain.

In my painting, I saw the presencing of the many unique individual strands of mycelia, and the central ‘nodes’ where they meet and intertwine. In so many ways our Musea community reflects the framework of a mycelial community. We each represent a unique strand or piece that is ‘doing our thing’ with heart and intention, eventually linking up with others within these energetic nodes where there is communication, new direction, and emergent properties arise. From here we keep on expanding out in further creative strands and flows, expanding organically as a whole organism. I consider the ways so many of us weave in and out of shared circle experiences, yearlong painting processes (such as Maverick or Ritual), and other group experiences – the things we share in common – the nodal points – and then move into our individual work that is nurtured and catalyzed by community energy. It’s a beautiful picture to hold in my imagination. 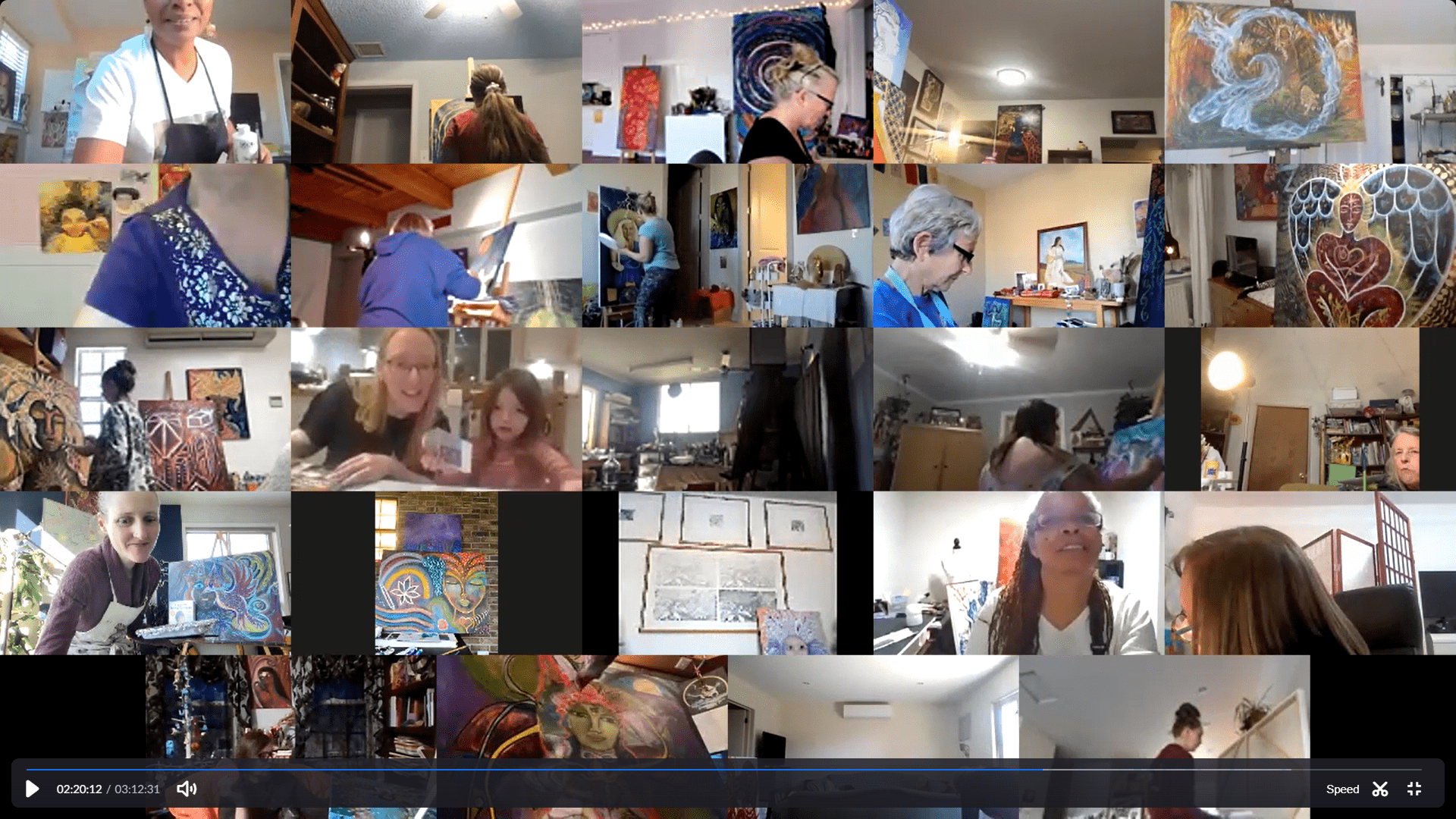 In an article by Vu Le of NonproftAF, he speaks to the parts of mycelial behavior that support organizations best practices for creating communities of care and impact. I found these really quite fascinating and decided to take the liberty of putting my own spin on them. These include…

Reflecting on all of these points brings me great joy, as I feel that our Musea community is practicing all of these mycelial ways of being.
Most of us seek community with like-hearted people who desire to co-create a unique kind of shared experience that reflects our values and dreams for ourselves, our global family and the earth. As you explore your relationship to community, I invite you to consider your own ‘why’ for choosing the communities you are a part of. What called you to your communities? What are the gifts that you bring to your communities and receive from your communities? How are you shaping and shaped by the your experience of community?

Bring these inquiries to your Art Journal, and please do share your reflections with us in the iMusea App using #MemberMusing and #Community

In closing, my hope in sharing this musing is to invite you to both celebrate and investigate your place in your chosen communities. To know your ‘why’ for being there, and perhaps examine your role within the communities that love and depend on you.

Here is Monthly Relationship Inquiry Exploration Card on the topic of COMMUNITY. This is available on the All Members Portal for download and print for your watercolor journals. We invite you to share your exploration with us on the iMusea app, using #membermusings and #community for witness and celebration!

As a special gift, Shiloh Sophia has also created a Watercolor Materials Overview for our Membership Community to support us in making the most of our watercolor journal devotional practice this year. Enjoy the video!

What’s On at the Museum! 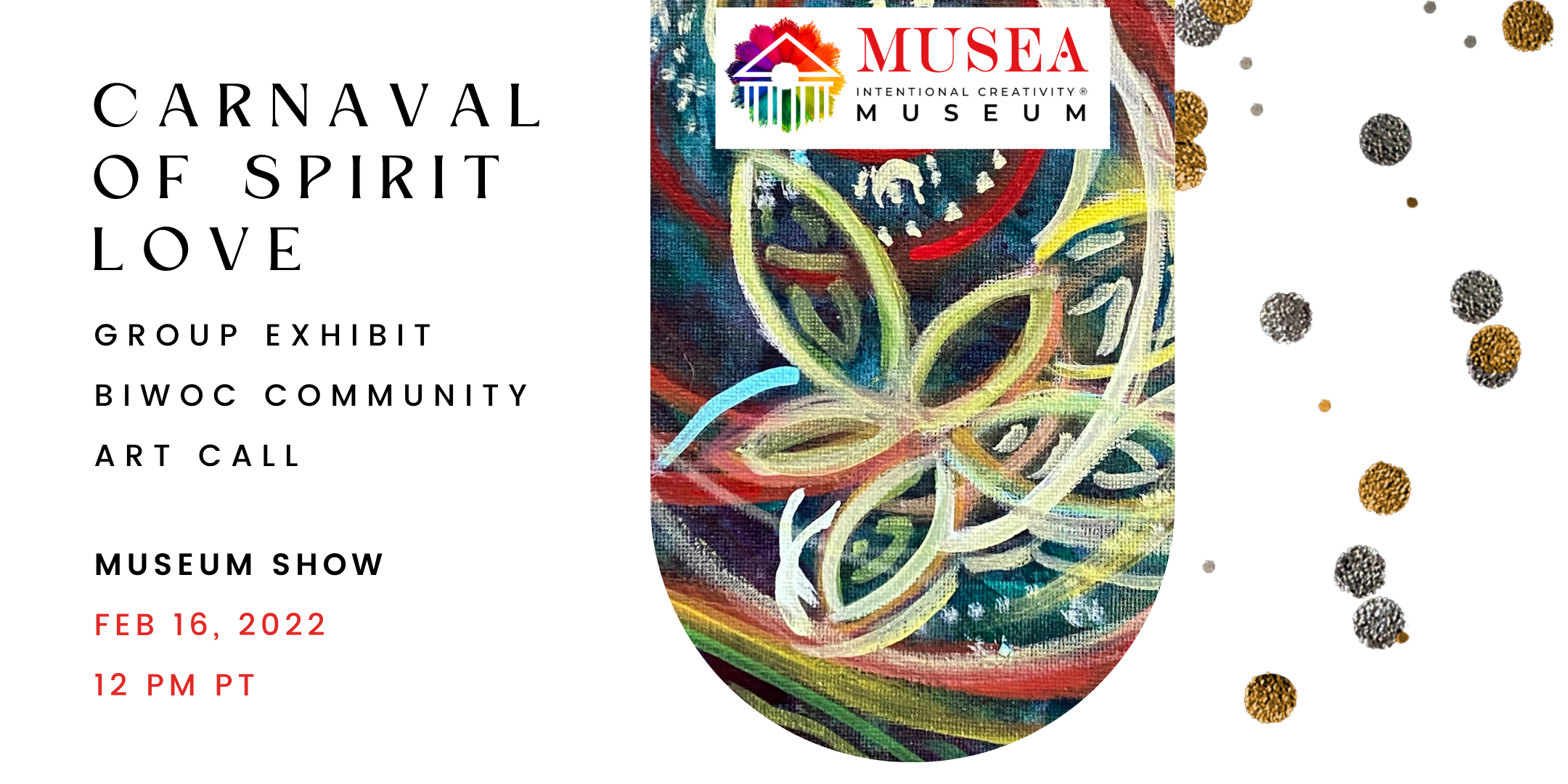 Join us February 16 at 12 pm PT for the Museum Show and exhibit opening of Carnaval of Spirit Love! Our first BIWOC Member Exclusive Exhibit and Art Celebration!

This Museum Virtual Show will be hosted by Musea Intentional Creativity Museum, with Collaborative Curation from the MUSEA BIWOC Leadership Team, including Elder Semerit Strachan and Elder Lauren Adorno-Weatherford, Sumaiyah Wysdom Yates and Milagros Suriano-Rivera, Curator Shiloh Sophia, and Curatorial Director, Amber Gould, as they take you on a visual journey of music, poetry, and an array of paintings that hold the souls and hearts of each BIWOC member.

This is an opportunity to take yourself on an Artist Date, and invite your family, friends, and community to join you at the virtual museum! We hope you will join us for an amazing show! Get Your Ticket Today 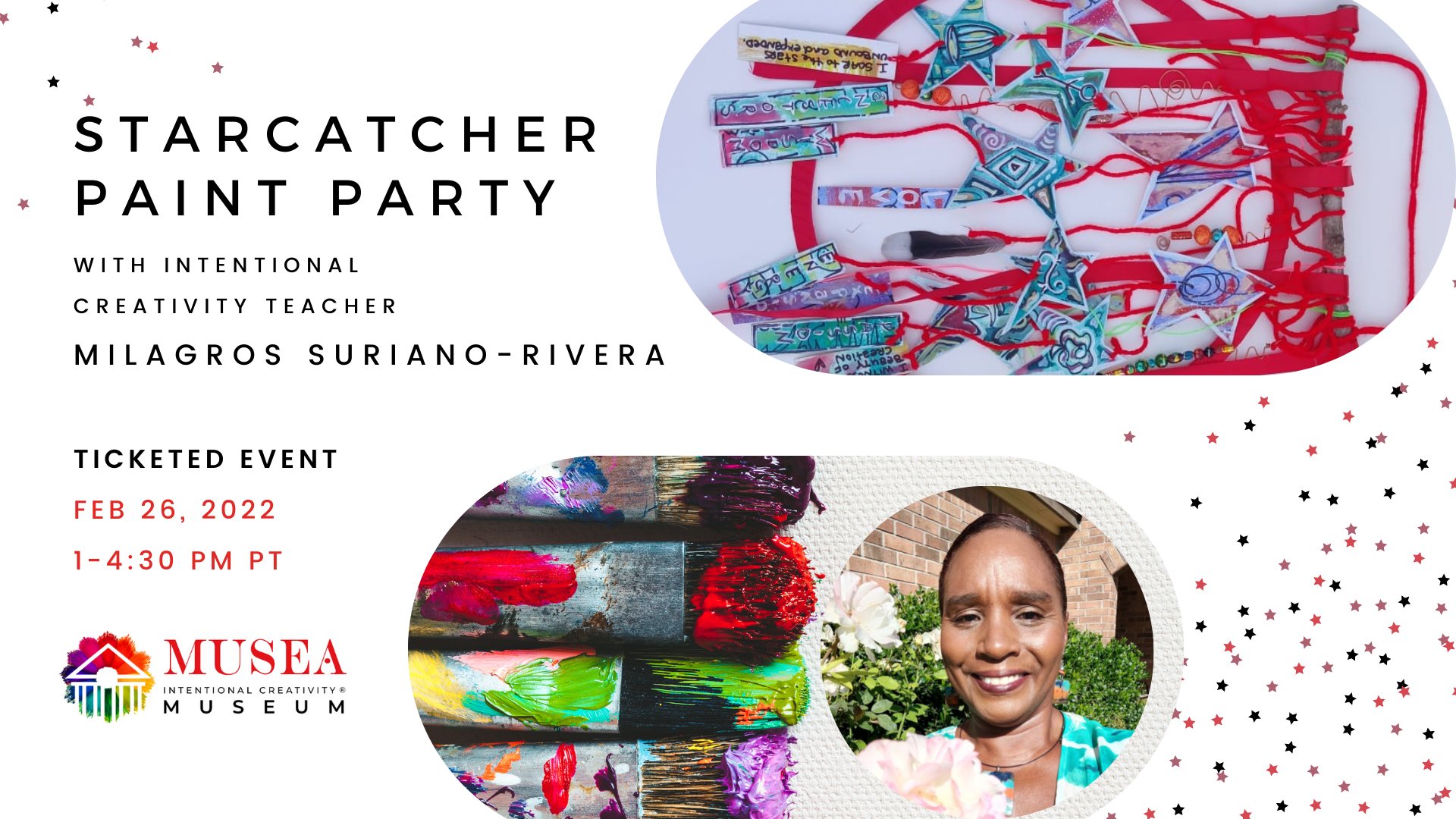 Join Intentional Creativity Teacher Milagros Suriano-Rivera for the Starcatcher paint party – a Cosmic Journey of Self healing. Come as you are. Gather your friends together. Prepare the art studio, and let your Creative Muse out to play, because it’s time to shine!

This Intentional Creativity experience is guided by Intentional Creativity Teacher, Milagros Suriano-Rivera, who will take you on a fun, inspiring and empowering journey to reclaim your cosmic address through paint. That’s right – your cosmic address – that powerful place of being in this Universe that only YOU can uniquely inhabit. In the Starcatcher workshop, we will be reaching for the stars not just metaphorically, but by accessing through creative play the cosmic part of us that is made from the stars, and is capable of co-creating our healing and embracing our brilliance!

Become a Member today of one of the world’s largest and most well established Art Movements – MUSEA : Intentional Creativity!

“Gather with us. Be a part of our movement. While we can’t yet be together in person, we don’t need to be isolated from one another. Every place a MUSEA Member is, a MUSEA IS, so we are all over the world! Being a member is something to feel good about and connected to as a part of each of our individual stories, as well as our collective story.” 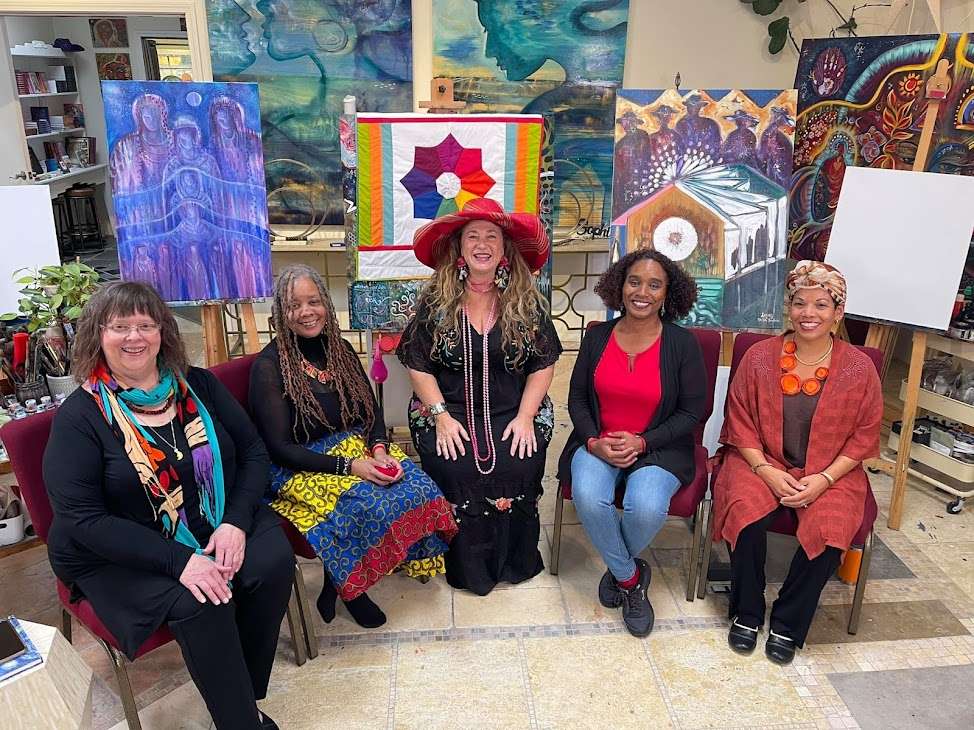 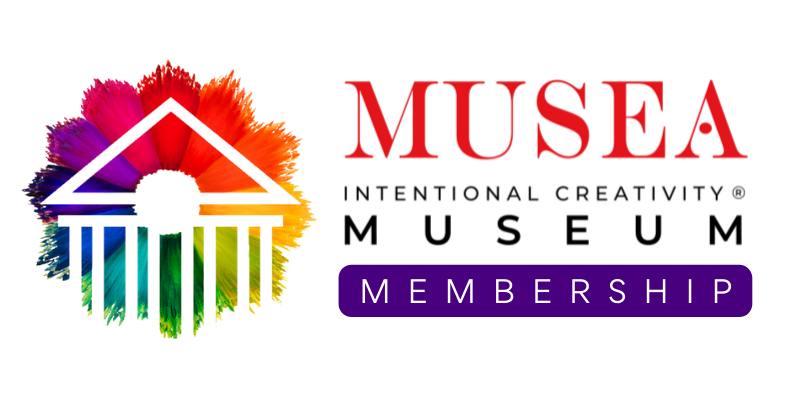 About the Author: Musea Co-Curators