In Her Element – Artist Spotlight on Juniper Mainelis 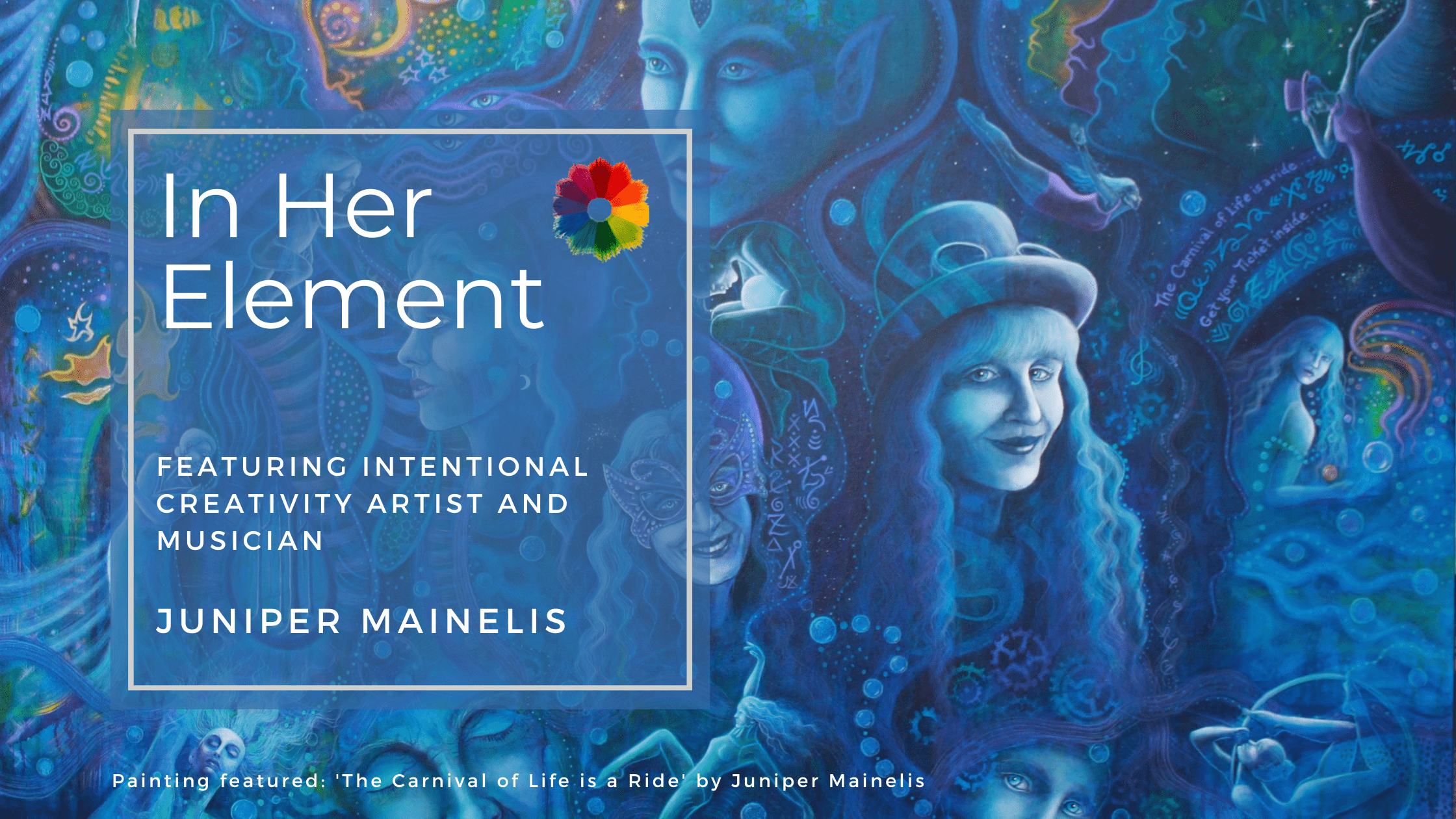 The following is a question and answer style article featuring Intentional Creativity Teacher, Guild Member, Artist and Grammy-nominated musician, Juniper Mainelis, sharing the ways in which she intentionally weaves painting, music and storytelling together to be truly ‘in her element’…

What is your Origin Story with Intentional Creativity?

My journey with IC began in 2016 when I came upon one of Shiloh Sophia’s paintings. I was mesmerized by her imagery and googled to find out more about this fascinating woman. Then I learned she had a complimentary class online and I signed up. As soon as I heard her speak, I knew I must be a part of what she was offering because I recognized the frequency she emitted and felt called. I jumped full-on into what would completely change my life in all the best ways and I graduated from Color of Woman in 2017. 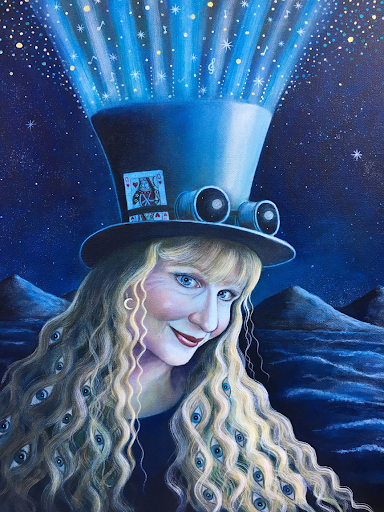 What has your creative journey been like leading up to finding Intentional Creativity?

Prior to taking the Cosmic Cowgirl path, I left home at age 17 to join up with ROMANY, a gypsy-rock traveling band. We lived in LA then, but we traveled around in a fabulous painted school bus playing gigs at festivals, clubs, and theaters. At first, I was just the girlfriend of the keyboard player, but it wasn’t long before they discovered I had a nice voice and I started singing back-ups, then lead vocalist, wearing colorful gypsy clothing and playing tambourine.

After a few years touring and recording with that group, I left to perform with numerous other touring bands, recording, and touring nationally for 17 years. I released my first album, and I also had an MTV video and even received a Grammy nomination.

Then I took a break from music for a while, moved to the Midwest, got married and had two daughters. But when the kids got old enough, I resumed performing in local bands, and singing on jingles for radio and tv, while staying close to home to also raise my family.

Drawing and art had always been just a hobby, but all that was about to change!

How have your Intentional Creativity paintings inspired you or communicated with you?

I fell in Love with the IC process and early on in my training, and as I was sort of in an altered state while painting my Muse, I began painting symbols that I had no idea what they meant. After studying the painting and symbols I had “channeled”, I was trying to make out what they could possibly mean. I searched for symbol meanings and after no luck in deciphering them, it occurred to me to ask my Muse and ask myself, “What do these symbols mean?” The floodgates opened and I received meanings for the symbols, and an ongoing dialogue with my Muse. I began writing, speaking, signing, and singing the language of light. The symbols I had channeled in my painting were Light Language. And also , from that day on, I began writing songs to accompany many of my paintings.

The funny thing is, music and art had previously been two different expressions for me, yet now the songs became another dimension of the paintings. Then poetry began flowing . Nearly every painting has a song, poem, or story to accompany it , giving a more in-depth exploration of my paintings.

Recently one of my paintings had been completed (I thought), yet one day she spoke to me, communicating that she wanted a transformation. The painting had been my Black Madonna interpretation with a very gentle expression of the divine feminine. But now she wanted to be portrayed as a woman with confidence and a queen-like presence. She became a Nefertiti -type Queen with a striking angular headpiece and jewelry. She would still retain her soft feminine gaze but now with a bold and strong persona. She also asked me to include her unique hieroglyphic symbols. That painting is now titled “Queen of Transformation”.

I should also mention that during my Color of Woman training, I was inspired to write a song for each of the paintings, and songs about my experience. I recorded an album titled MY COMPASS JOURNEY and it is available on most digital platforms. (FYI: as a singer I go by the name Juniper Bay Meadows) : http://smarturl.it/MyCompassJourney

What do you desire other people to experience when they see your paintings or hear your music?

It is my desire to inspire the observer to open portals of their imagination and feel the medicine and intentions infused within the canvas, music, and lyrics. As they study the work, more details are perceived, felt, and revealed, encouraging connection with their own view of the divine.

How do you express and offer Intentional Creativity specific to your cultural context (either with personal paintings and or offerings to beloveds)? What are some of the powerful insights you have received from your Painting Practice?

My creative offerings to my Beloveds are like holding up a mirror. I wish to uplift others if they so choose. I have learned with each deep dive into using these techniques, that my gnosis of personal growth and healing has given me a coherency of awareness. And by practicing IC painting daily , I have come to recognize that I am healed enough, that I choose to belong, and that my paintings, poems, and songs are all expressions of my desire to be a light. We all are! 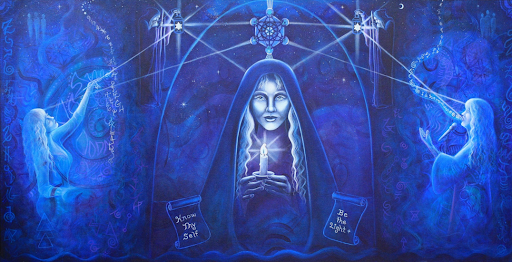 Painting ‘I Am Light’ by Juniper Mainelis

Tell us about your experiences with Art Show Exhibits – has this been a part of your journey as an artist?

In 2020 I began exhibiting my paintings in Juried Art Shows, and I have had the great honor of receiving numerous awards including 2- Best in Show, 1- first Place, 1- Second Place, 2- Third Place, 2- Honorable Mentions and 2- People’s Choice Awards. And of course, there have been many shows I was juried into but won no awards, as well as several shows I entered and was not juried into at all. Just put yourself out there, no matter what the outcome. It will stretch you as an artist and It’s fun to enter paintings that go with the theme of the show.

I have noticed that many people seem to resonate with my use of vibrant colors and images of empowered women. When showing a painting that also has a song, I use QR codes so the music can be listened to while the painting is being viewed. I will also post any song lyrics and poems along with the paintings. Viewers have commented on how they love having this added dimension. I have also received these comments: “Love the Music, Love the Painting!”, “The music perfectly compliments the painting, bringing it to life!”, I can feel your intentions when I look at your work!”,” Your words, your paintings, your songs…so many facets to you expressing your message!”, “Wow, just love your use of color, detail, and the symbols”. I sometimes feel overwhelmed by the love, and when people share how my work has touched their lives. Especially from those who I have never met…connecting with my intentions, message, imagery, and songs.

I have been invited to exhibit my art in a solo show at Ashtabula Arts Center where I will show 40 pieces. The show is titled ‘She had to lose herself…to find Herself” and runs for the month of August with a reception 8/19/22 where I will speak about my body of work and will have originals, prints and merchandise for sale. I can hardly believe how much I have grown as an artist and also in my personal awareness.

To learn more about the show, you can follow this link: https://ashtabulaartscenter.org/event/juniper-mainelis-she-had-to-lose-herself-to-find-herself-2022-08-19/

What inspired you to submit your paintings to various art shows? Do you have advice for other artists in the IC community on how to get past any resistance there might be to participating in exhibits, especially Juried Exhibits?

I was motivated to submit my art to Juried Art shows initially for validation, however I have learned that the best part is getting to know the other artists. And even though I have earned several awards; and it’s an honor to win, it’s a great experience to just put yourself out there and be seen and stand side by side with other talented artists. As I continue to grow as an artist, I feel proud to represent Intentional Creativity, as I am usually the only artist painting in this approach (except of course when I have exhibited in several Musea Exhibits).

My very first Juried show I was shocked and delighted to win Best in Show and People’s Choice Awards. My advice to other artists would be to go ahead and put yourself out there. It’s a lot of fun and you never know… you might win an award.

Painting ‘Knowing Myself’ by Juniper Mainelis

How do you think that participating in Art Exhibits has contributed to your development as an artist? Do you have additional advice for artists in the IC community about how to more fully step into their “Artist Archetype”?

Participating in Art Exhibits has stretched me to strive for excellence and has been validation that my offerings have value, not only for my own healing and transformation, but to also inspire and uplift others to open the portals of their imaginations. I offer a poem that speaks to the power of this called ‘In Her Element’:

Is there anything else you would like the readers to know about you or your creative work?

I am a Guild member and Constellation Guide for the Midwest IC group and I continue to use IC in my daily painting practice. It has become part of everything I create and who I’ve become. I have written another album of songs that I hope to record and release soon, and I’m working on my website He’ARTsongs Studio where I will have all my offerings of art, music, poetry, classes and merchandise available.

It has been my great privilege to share here with you!

We invite you to scan the QR code below to instantly listen to Juniper’s song ‘Oh My Muse’, a part of her My Compass Journey album of songs that accompanies her paintings. Enjoy!

About the Author: Musea Co-Curators