An Artist ‘Being About it!’

The following is an interview-style article written by co-curator, Jessica Richmond, about the inspiring personal Creative Journey and upcoming solo exhibit of Musea’s Vice President of programming, Milagros Suriano-Rivera.

The solo art exhibit by Milagros Suriano-Rivera titled, Being About It!, is the result of a twenty-five-year journey that began as a creative mother and daughter activity turned money-making venture (out of financial necessity) from what was essentially a shop in a box business model based on the honor system that transformed into a form of healing through which an incredibly talented artist and educator emerged and is now part of the Musea Museum leadership team.

During our interview, Milagros shared that about twenty-five years ago when her daughter was young she began making paper jewelry as a creative activity for the two of them to do together. As most parents have experienced with many of these kinds of endeavors with children, Milagros watched as her daughter quickly lost interest. However, Milagros found that she enjoyed it and continued on her own. What started out as a process of making simple paper beads which she learned from a book, has evolved into the complex meticulously hand-crafted pieces that will be on display as part of her upcoming solo exhibit. 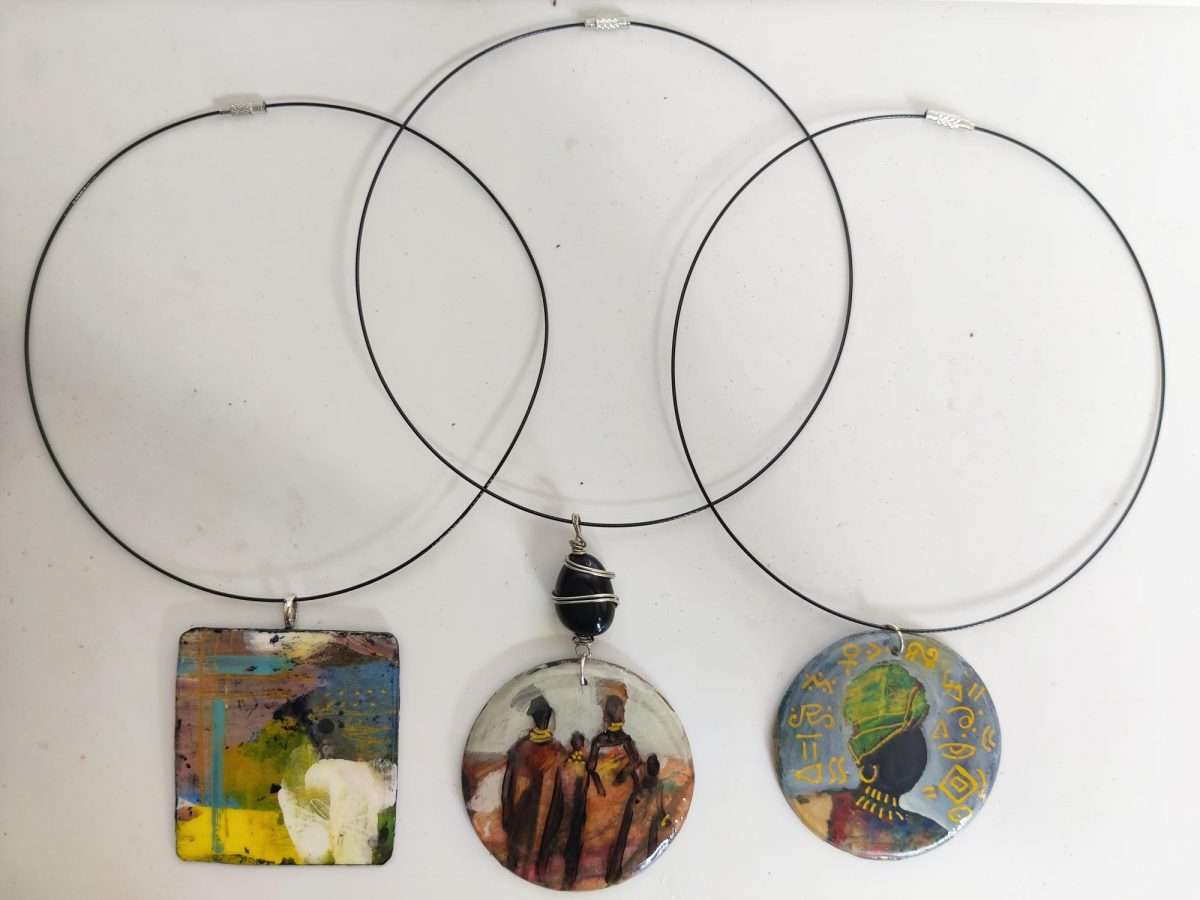 During this time in her life, Milagros faced extreme ongoing financial pressures including sometimes not even being able to pay the bills, and the challenges of being a single parent living in Queens. She was working hard at a nine-to-five job that entailed over an hour each way of subway commuting time. However, Milagros never let her creative spark dim as she continued to make her unique jewelry. At that time, she was working for the Methodist Church and had learned stained glass from a fellow creative colleague, Ed Moultrie, who became her mentor and she started incorporating stained glass into her jewelry-making journey. Her co-workers started to take notice of the pieces she wore to work and her hobby turned into an informal business bringing in much needed additional cash as women requested to purchase earrings, barrettes, and necklaces. She established a system where she kept her jewelry creations in a box in a drawer for anyone to help themselves on the honor system if she was away from her desk. Her new customers would leave cash along with sticky notes letting her know which pieces they took. She even started getting custom requests, making a set with a particular color for one co-worker to wear to a wedding. She can still recall the delight and gratification she felt the first time she saw a woman she didn’t know in the elevator wearing one of her barrettes

At this stage of her development as an artist, Milagros was becoming increasingly innovative with her jewelry designs, often finding inspiration from magazines and Pinterest from pieces made with different kinds of metal or polymer materials which she would then experiment with translating into her paper techniques. In 2012, Milagros discovered her love of painting as she began trying different kinds of art journaling as a way to “express feelings” and help “work through a toxic relationship.” Milagros then discovered the work of Musea Curator, Shiloh Sophia, which was included in an online art journaling course by Tamara Laporte called “Life Book”. The lessons within this course also contributed to her developing an increasing interest in portraiture. 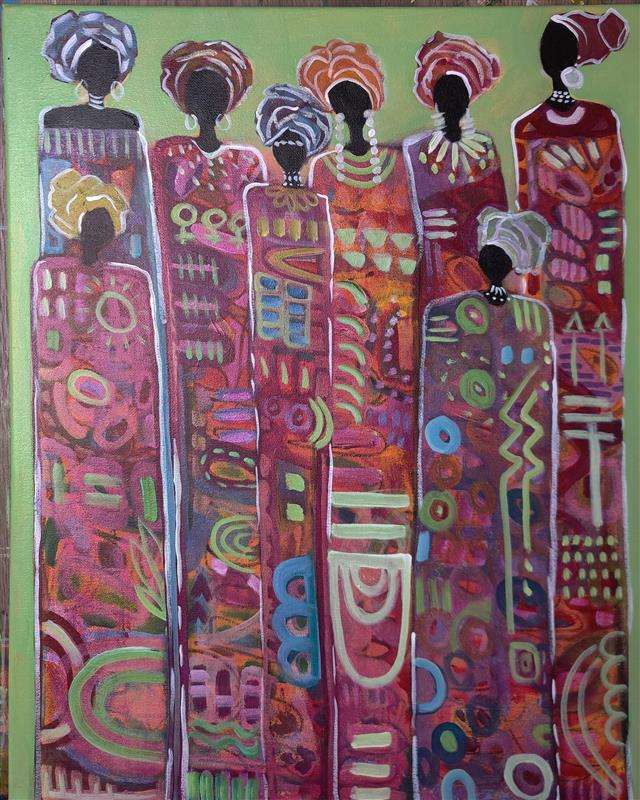 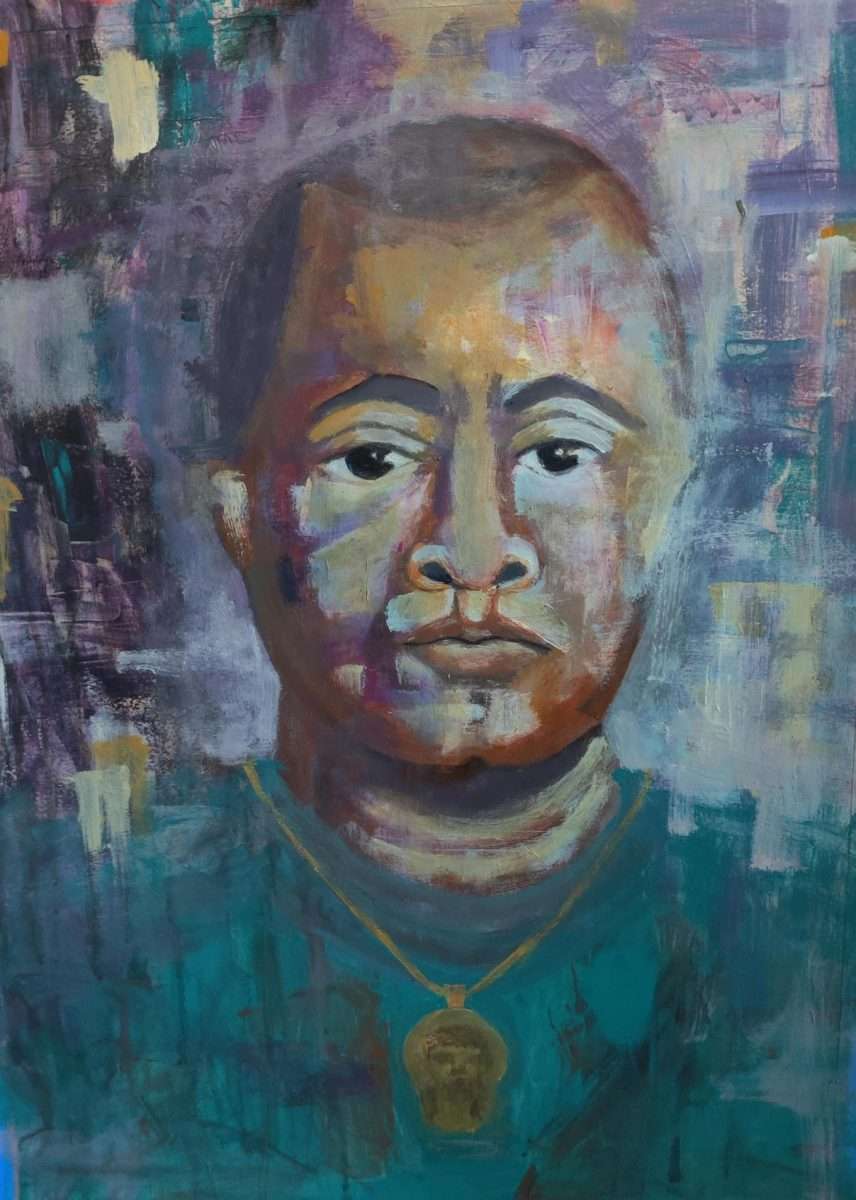 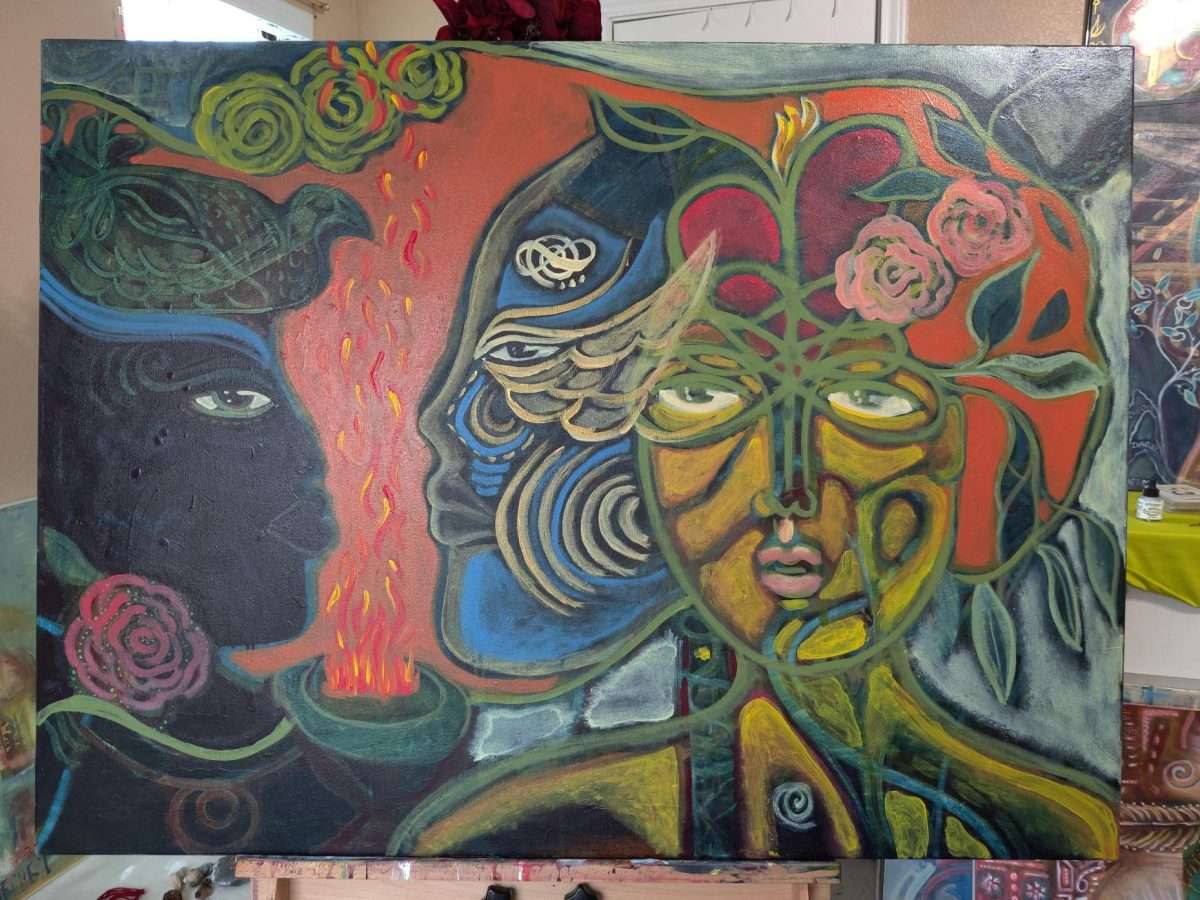 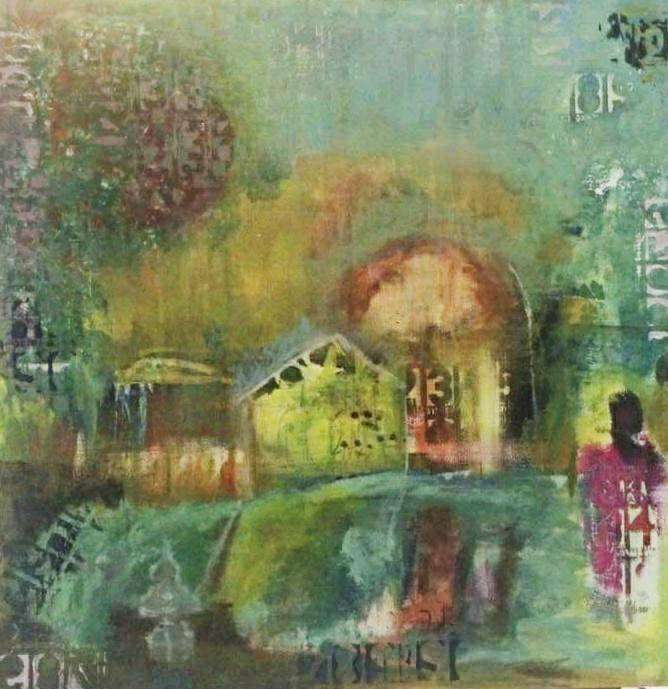 In 2015, Milagros was also invited by a well known professional artist, Pauline Agnew, to attend her artist retreat called, A Space For Dreaming, which was located in Asheville, NC that year and she would later attend Pauline’s Expressive Landscapes Retreat in Ireland where she learned to paint abstract landscapes for the first time, another influence you can see in her current work.

Milagros identifies Pauline as one of her most influential teachers describing how this way of working inspired her to gain courage as an artist by trusting in her initial brushstrokes, versus first drawing the subject before painting. Milagros states of this technique, “it helped me to better understand painting in a painterly way,” which she also incorporated into her jewelry style. 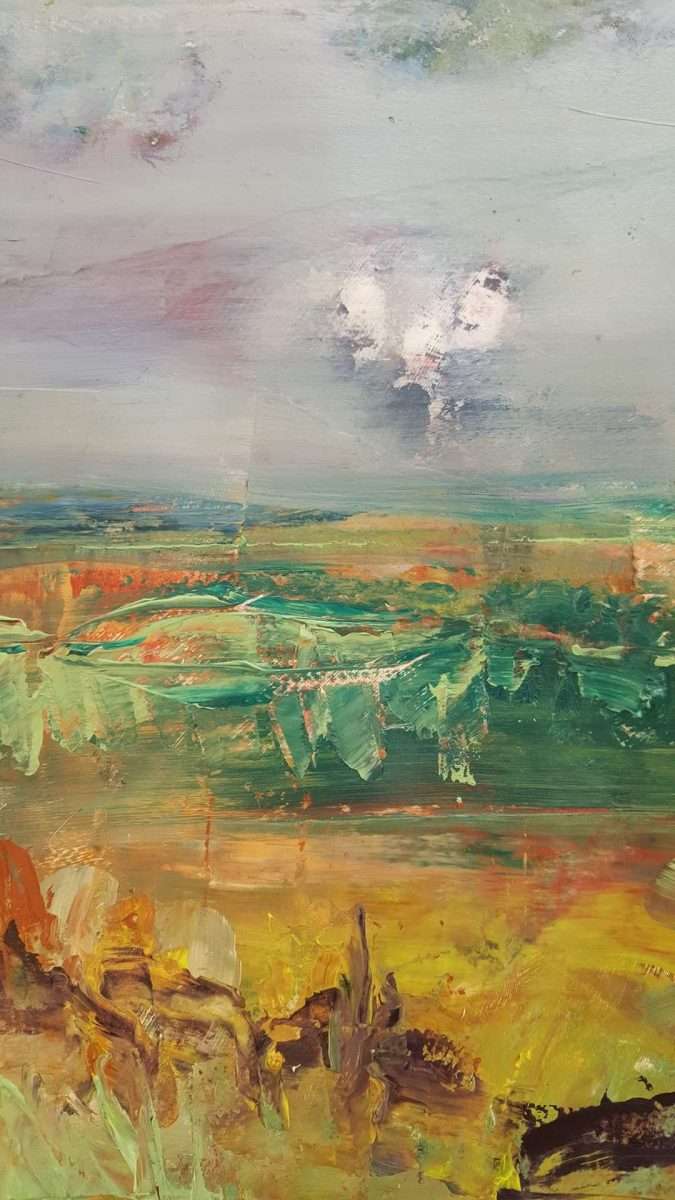 However, even with this progress, she still felt that there was a missing piece.

It was around the same time that she also took a course from Flora Arube called The Art of Allowing, which proved to be a very powerful way of working and helped to pull in another piece of the creative puzzle. When she discovered that Flora was also part of the same Intentional Creativity Community, she viewed it as a synchronistic sign that she was meant to further her work with Intentional Creativity.

Shortly thereafter she took her first Intentional Creativity medicine painting course, Apothecary, online which turned into an invitation to support the in-person class with Shiloh Sophia in Sonoma. Milagros was deeply impacted by this experience where she was also able to meet Musea’s art matriarchs, Carmen Baraka, and Caron McCloud who have since walked on. She was so moved in fact that she decided to “finally” take the Color of Women Intentional Creativity Teacher Training after having vacillated about it for a long time. 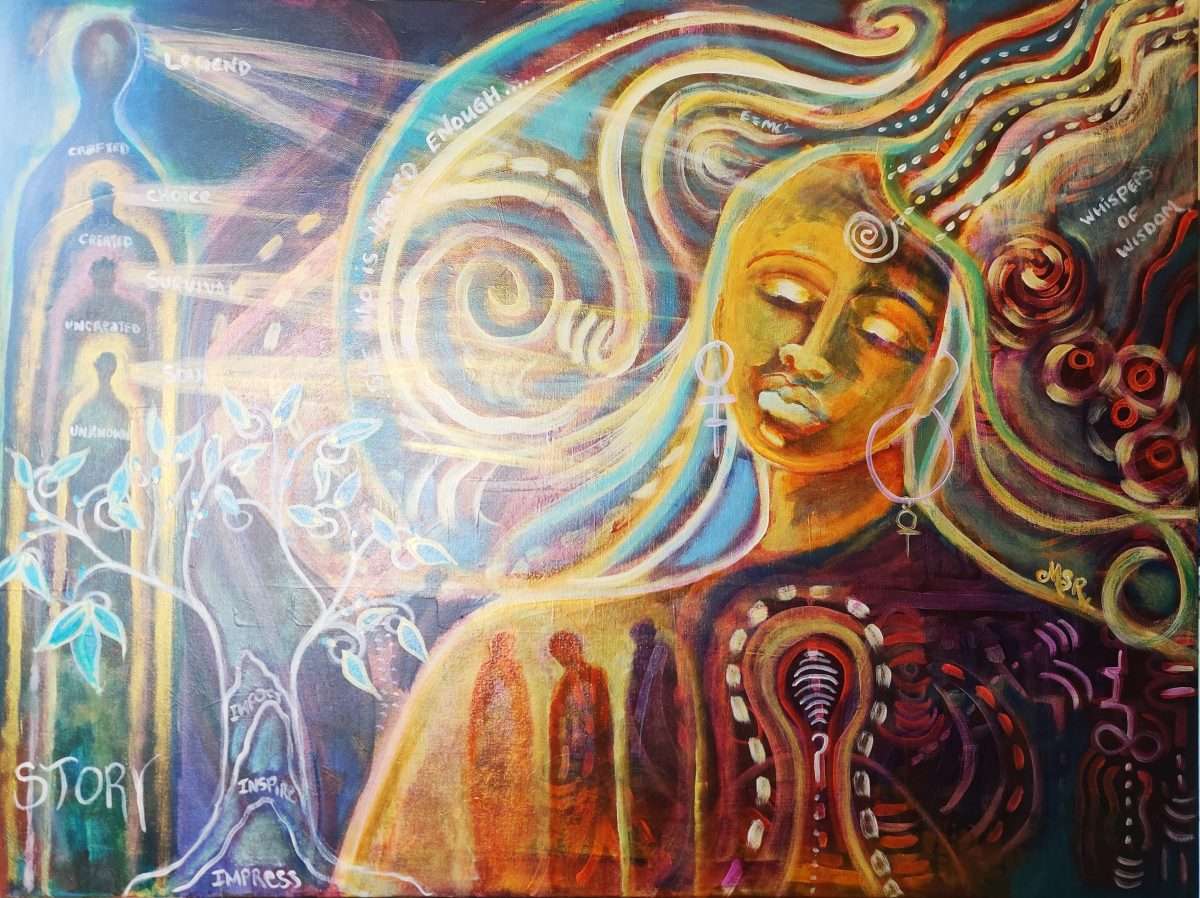 Inspired by her COW training,  in 2017 Milagros and her husband decided that a change was needed which was what helped to spur her to start dreaming of becoming a full-time artist. She dedicated herself to her daily creative practice, allowed herself to dream of attending another Pauline Agnew retreat in Ireland, then spent the summer working at the festivals to earn enough money to pay for it.  Milagros then chose to leave her seventeen-year career in the corporate world and relocated with her husband to San Antonio, Texas where she purchased her first home with enough room for her studio space. 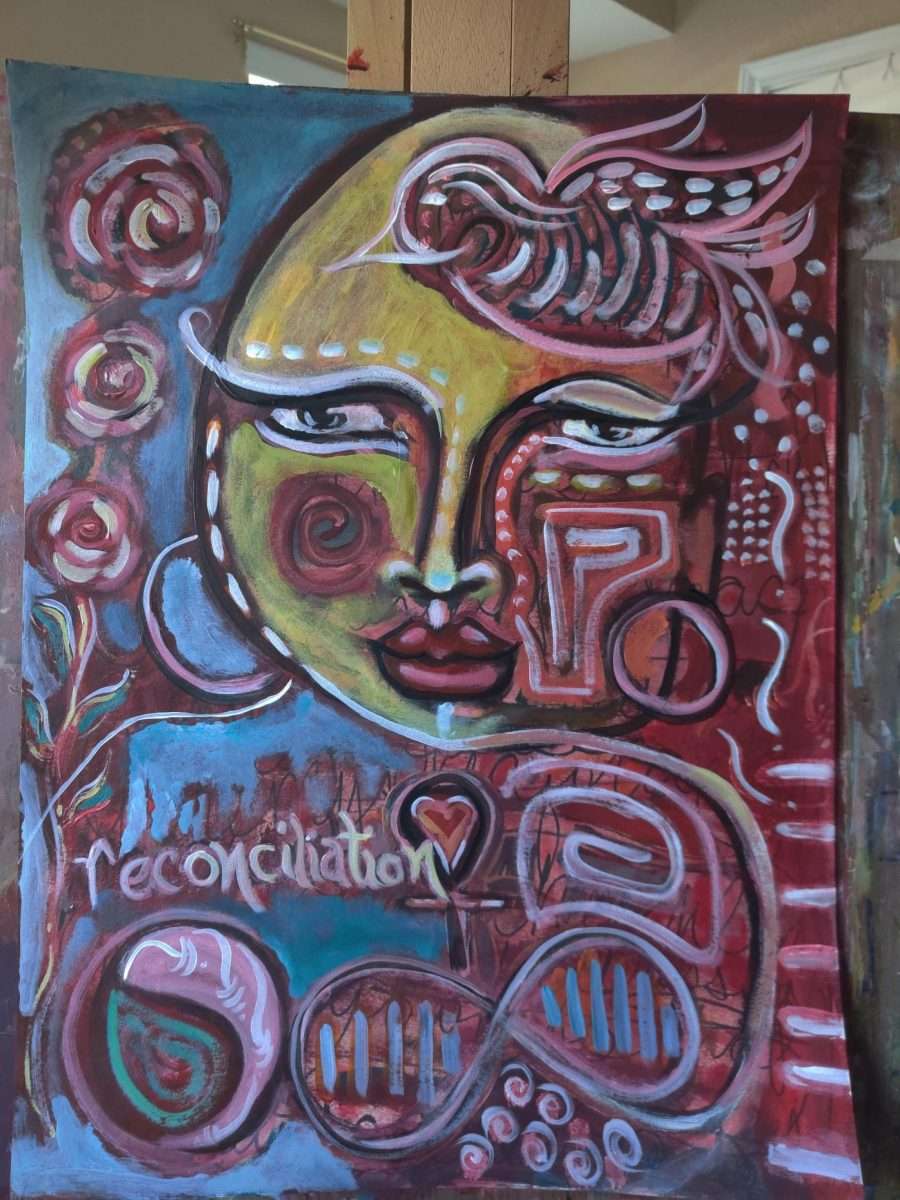 However, due to financial necessity, Milagros continued to work another corporate job for two more years but has recently left the corporate world entirely to devote herself to being a full-time artist. She still lives in Texas with her dog, Gizmo, and her husband, Harold Small, who she considers to be one of her biggest supporters. He is also the inspiration for the title of her show, Being About It!. Milagros attributes his supportive mantra for her, “Don’t Talk About it, Be About it”, as one of the motivators that keeps her going through the many challenges creative entrepreneurs often face. Milagros continues to work from her home studio as a professional artist with a relentlessly dedicated daily art-making practice and describes feeling as if she’s “unable to stop pinching herself” now that she is in the process of preparing for her own solo exhibit partnering with MUSEA Intentional Creativity Museum.

Milagros describes the style of art that will be part of her exhibit as organic, natural, feminine, and delicate, with some Bohemian Chic influences. It’s important to note that she works tirelessly on everything that she creates whether it’s jewelry or painting. While you may see common threads running through her jewelry pieces, they are not made with a cookie-cutter approach. Even though there are time saving techniques that could be applied, she chooses instead to labor over each individual piece for many hours. Each one is inlaid by her hand, layer by layer because she believes it to be not just jewelry but wearable art. This same passion and care are also expressed throughout her paintings and sculptures. 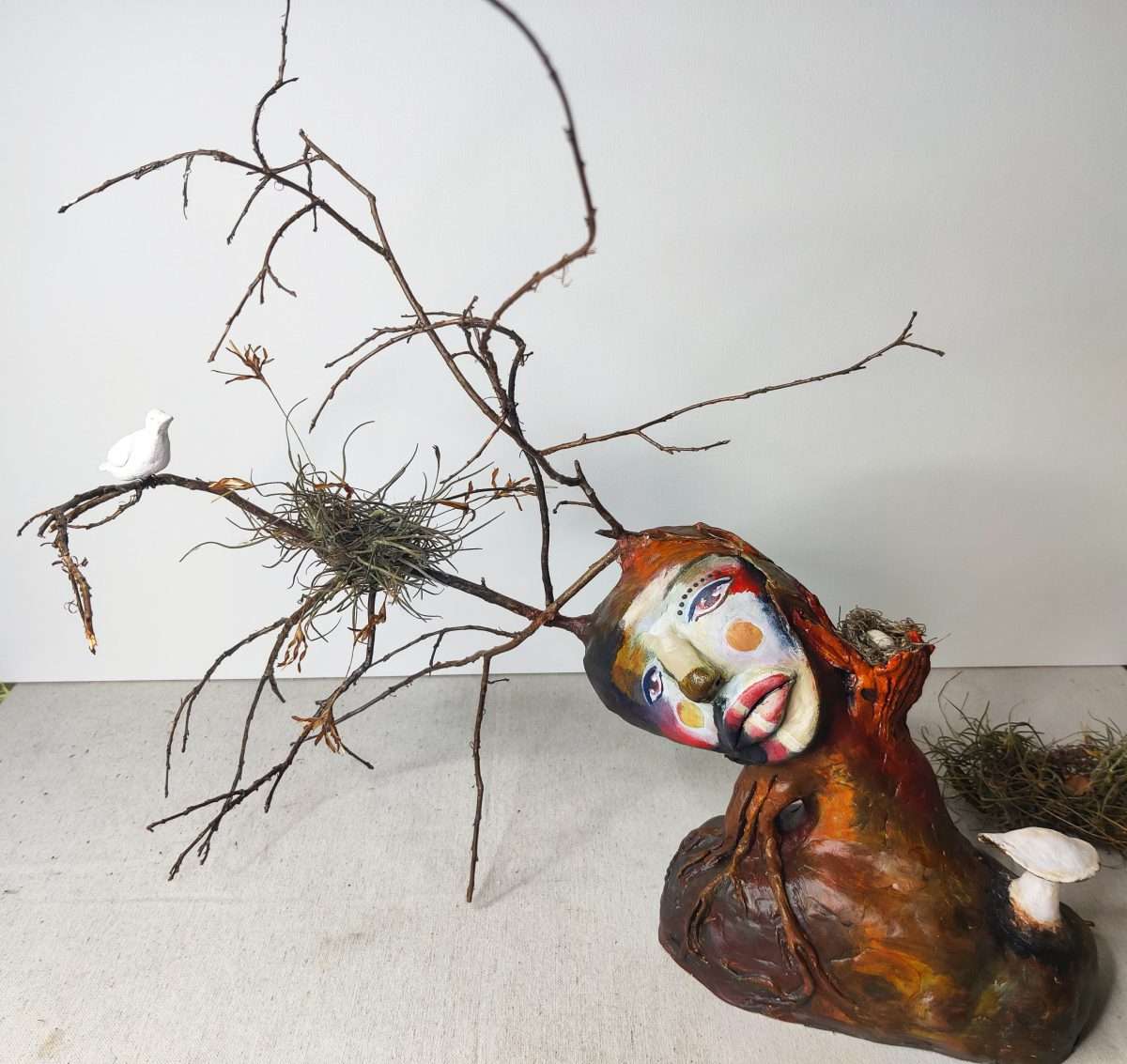 About her artwork, Milagros says, “it’s all a labor of love, and when I’m creating I feel hopeful.”

During this interview, Milagros also shared having experienced self-doubt early on in her creative career, especially when comparing herself to other professional artists, but now she has  come to a place in her journey where she describes herself as being,  “a creative by my own definition.”

Regarding her advice for other creatives? “Just believe, show up to the canvas, and paint. You don’t even have to understand what you are creating, just be about it and the universe will figure it out with you.”

With this show, Being About It!, Milagros is fully embodying her role as a professional artist. No longer dreaming about it, but Being About It. Her caring and generous heart, dedicated and disciplined artistry, and innovative spirit will be expressed in each one of her creations whether it be her wearable art jewelry, paintings, or mixed media sculptures.

We invite you to join us for the LIVE Museum Show, June 15 at 12 pm PT. You can claim you complimentary ticket here.

You can check out Milagros artwork and more about her at her website: https://healedenougharts.com

We look forward to seeing you at the show!

My art is influenced by many talented artists; however, it wasn’t until I found the teachings of Shiloh Sophia McCloud regarding the use of creativity and intention to catalyze and awaken oneself that I realized that my creative voice matters. When I reflect on my creative journey in the context of my life, I know that creativity is about embracing my shadow, creating my own light, and the ability to dance between the worlds so that I may create a potential for healing for myself and others. My hope is to inspire and impact others so that they can reclaim their personal power and self expression through creativity. That is what I am here to cause and create.

If ‘To Be or Not To Be? is the question, then Intentional Creativity is the CHOICE that gives you access to the answer 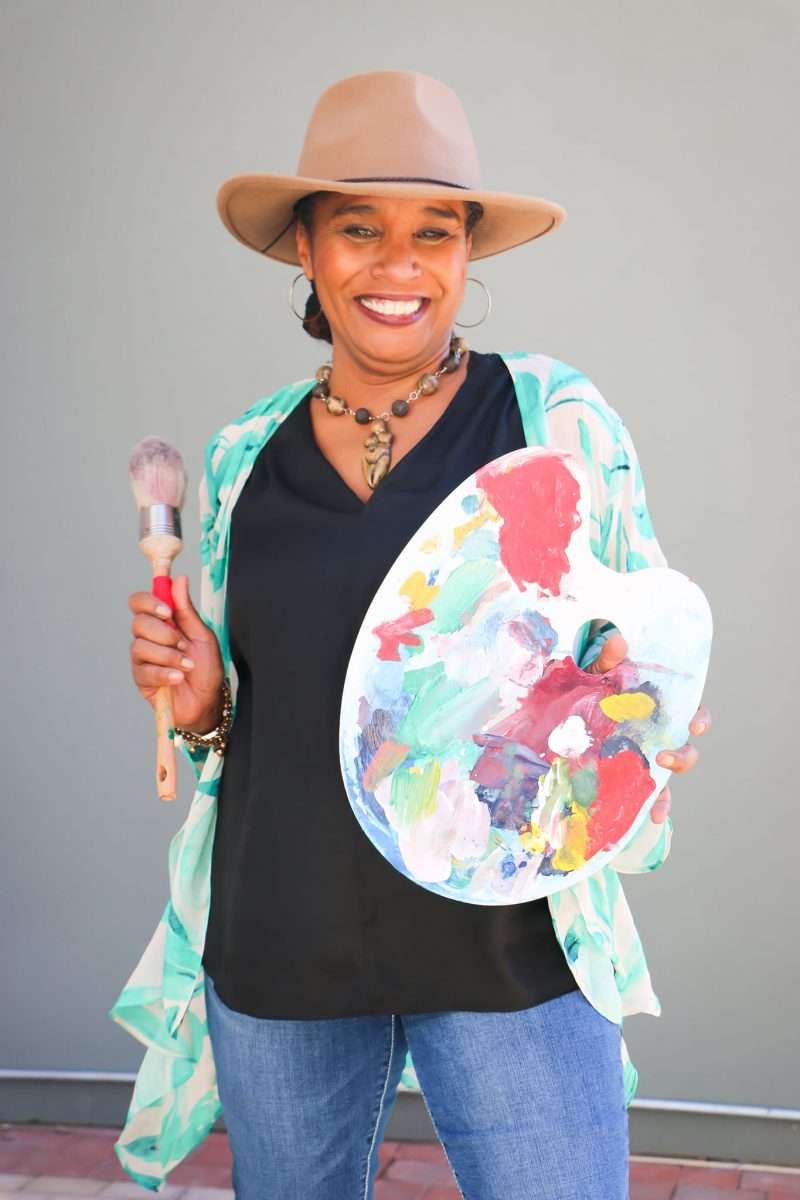