A New Shop with an Old History

A New Shop with an Old History 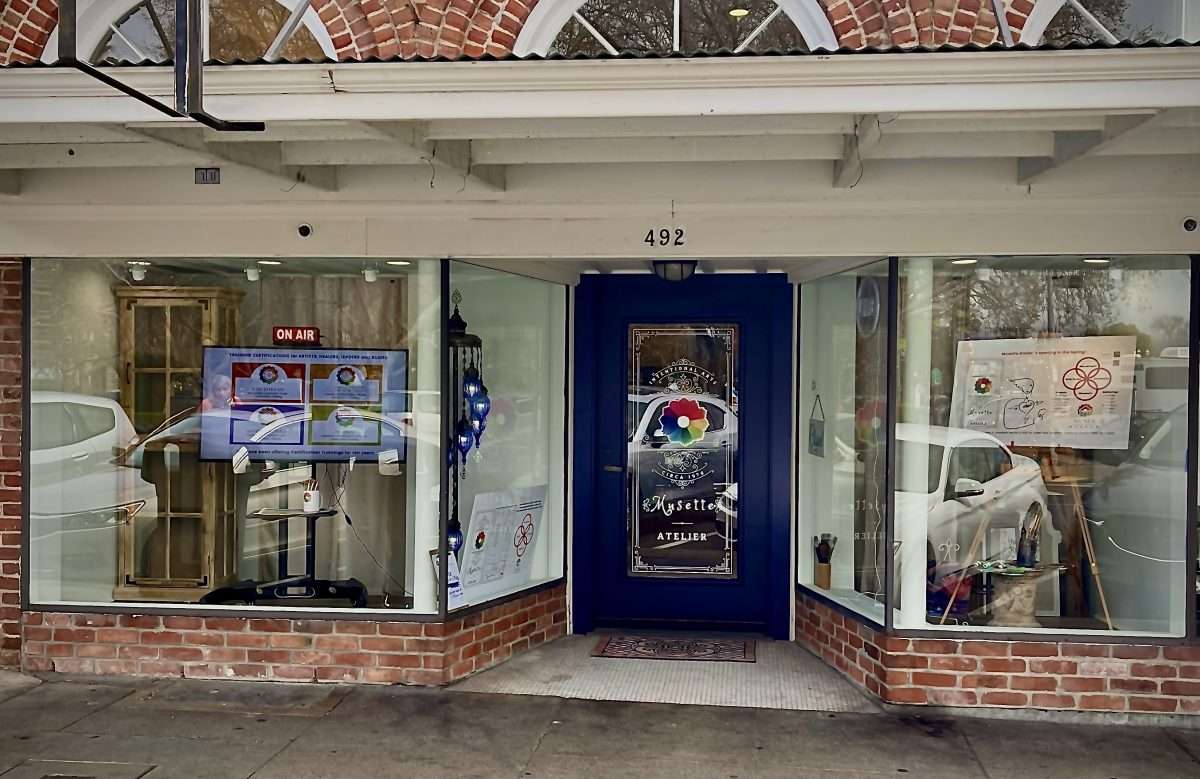 Musette Atelier - Our new shop on the Sonoma Plaza! In the left window you'll see a television screen that is always on and presents a slideshow to passersby about what we do at Musea: Intentional Creativity.

Musette is the new gallery, workshop, film studio, and event venue curated by Sonoma artists Shiloh Sophia and Jonathan McCloud. They are the dynamic team behind MUSEA – an art museum and school with a global following. In love, work and life, they have created together side by side for ten years. They are pleased to open their latest retail storefront on the Sonoma Plaza at 492 1st Street East. (Right next door to Ledson Hotel.) Musette will be a space for local and global art exhibits, art classes, calls for art, unique gifts, and much more.

Musette is a working studio where MUSEA’s robust online education program will be broadcast live, or filmed and produced. Musette will be a welcome space for the school and gallery’s menu of speakers, book talks, workshops, classes, and more that bring visitors from all over the US as well as over 70 countries where students are based worldwide.

“The name Musette for our Sonoma Plaza store is inspired by a concept we apply in our Intentional Creativity classes – the Muse. The Muse is a reminder of the beauty, self-expression, and love in all of us. Musette is a space to honor that,” says Shiloh Sophia, owner, artist, and gallery curator.

Shiloh Sophia’s personal evolution as an artist began in childhood and her body of work, twenty-five years plus years in the making, is focused on an approach called Intentional Creativity® which informs everything she produces.  Her paintings, her custom art courses, her books, teachings, and even the artistic design of her spaces are all designed with intention. Intentional Creativity is a mindfulness practice that can be applied to any medium. Shiloh says, “Intentional Creativity isn’t a style of art, it is a lifestyle.”

While this latest shop may be new, Shiloh Sophia’s relationship with Sonoma starts at birth and is closely intertwined with her family history. Her history involves a creative matriarchal lineage encompassing multiple generations of female artists and businesswomen who passed their gifts from hand to hand since the early 1930ies

This bespoke story of Intentional Creativity in Sonoma’s Valley of the Moon started with a legendary family of artists in the late 1960ies. Synchronistic threads run through the fabric of an ever-unfolding story spanning over 50 years which has resulted in the creation of one of the largest art movements in the world; reaching over 100,000 by 2004 and reaching tens of thousands of people every month and growing.

This is a recounting of some of the threads of this very special story. Things first began with Eden McCloud and Caron McCloud (Karen Johnson), Shiloh Sophia’s grandmother and mother.  The two women entrepreneurs had a seamstress business and dress shops in Glen Ellen and the Sonoma Plaza with original designs and textile art. Other members of the family, her aunt Janet Seaforth (Grant) and Sue Hoya Sellars, who was like a second mother to Shiloh, were also in business making pottery and offering their art in various retail locations throughout the Sonoma and Bay Area.

This is one of the first synchronicities in the fabric because Musette is very close to one of those original shops as well as Shiloh’s childhood home on Napa Street. However, the history goes back further still. Caron had her first fine art gallery in Sausalito. Simultaneously, Sue was working with the notorious Jaunita on her barge. For those who don’t know of Jaunita Musson, she was a notorious North Bay local who had the bait shop on Sausalito’s Gate 5 Road (1953) and later moved into the paddlewheel, Charles Van Damme. Those of you who know Sue, can you imagine her as a waitress and dishwasher on the paddlewheel? It did hold a certain romance. The family attended her memorial in 2011.

This leads to the next synchronistic thread of the story; Caron and Sue, along with baby Shiloh and her siblings Brent and Shannon, lived at Juanita’s in Glen Ellen. For those wondering, yes,  this is the same Jaunita that had a monkey and a deer, wore muumuus, and had her bedroom in the restaurant and a pet pig. Jaunita was also Shiloh’s godmother and an early influence on her… “for better or worse” as the story goes.

When Shiloh was about a year old, the family moved to Napa Street in Sonoma. Shiloh still remembers looking out at the plaza from the balcony and being told that she took her first steps in the Sonoma plaza exactly at the corner of First Street East and Napa Street. As an adult artist, Shiloh knew she was an artist and wanted to open a gallery and follow in the footsteps of her creative family.

Shiloh has been the owner of several highly successful galleries over the course of her career.  The first was the Color of Woman gallery in the Sonoma Court Shops, with a second location in Sausalito. Both remained open for several years but when opportunity knocked, Shiloh moved the operation to San Francisco to a 7,000 square foot gallery. This is where she also began teaching and quickly developed a student following. She eventually had locations in Mendocino for five years and Healdsburg for ten years before returning full circle back to Sonoma in 2016. She describes the feeling as, “coming home.” Shiloh further describes feeling emotional when thinking about her Sonoma roots and being continually called back to, “these trees, Sonoma Mountain, and the moon that is like no other.”

The common thread for all of the galleries was to provide representation for not only her own fine art but also the collections of the women in her family and many other female artists. Shiloh has had phenomenal success as a professional artist and gallery owner, her businesses having earned multi-millions in sales including a wholesale line that was featured around the world in hundreds of stores.

Shiloh closed her Healdsburg Gallery in 2016 after a sold-out show. She was ready to focus on teaching art instead of selling art. Her work was having a real impact on people and she had continued requests from students wanting to learn her approach to art-making. Shiloh increased the amount of time she spent teaching and this has been her primary focus for the past ten years. Tens of thousands of actively engaged students from around the world continue to be drawn to Shiloh’s view that “everyone is creative,” and that “art is for everyone, not just those who have skill at rendering technique.” Under Shiloh’s guidance, MUSEA now has multiple creativity Certifications which train teachers, guides, coaches, and practitioners to work with others in Intentional Creativity. Shiloh has also self-published over 8 books which can all be found at Musette Atelier as well as in her online shop, www.shilohsophiashop.com.

While Intentional Creativity is an approach, not a style of art, there are components to the movement that are unique. They call it ‘Contemporary Symbolism’ – a modern echo of the early symbolists work that is inclusive of symbol, story, metaphor and mystical impact that moves between painting, poetry, story and theater. Symbolism thematically includes the inner world and intuitions, the sensual nature of the artist. The Symbolist movement of the 19th Century was a revolt against certain standards insisted upon by the establishments of the day. Shiloh Sophia is also in a revolt, against how people think about art and artists and art movements. The work is not realistic or abstract, it is an intuitive narrative of an idea, a mood, a relationship, a moment in time intimately connected with the artists internal life shared, moved from energy into matter. The movement she is a part of is not about a style of work, but a way of working.

In 2016, Shiloh and Jonathan moved their personal residence back to the Sonoma area purchasing the “Styles and Stone” property at 75 Fremont Drive. They moved their highly successful art school and gallery into the space as well, often running it like a little resort. You have likely seen the bright color wheel as you drove by these few years, or a parking lot full of cars. They had events regularly with hundreds of people. During 2020-2022 like the rest of the world, they had to cancel all events and are excited to reopen with a dynamic calendar of experiences including Muse Days daylong classes, Moving Meditations, and 3-day Retreats, as well as Guided Tours led by the artist.

Jonathan, a chef, restauranteur, winemaker, farmer, and chocolatier works side by side with Shiloh and will be offering an apothecary line of products in the store including tea, chocolate, olive oil, and other culinary offerings. Jonathan is also the filmmaker and producer of their global education. The couple hosts supper clubs in person and plans for catered events and virtual wine education. Musette is not a wine bar, however, they closed their wine bar by the same name in Tiburon during the pandemic. As a part of the museum they run a monthly salon called Imprensiva Society for those who are museum members – membership is open to all at www.imusea.org.

So now with Musette Atelier, the McClouds wish to offer the community a space that nurtures an experience where people can freely engage in the feeling of art and the artist’s lifestyle. A working studio where anyone can view themselves as an artist. “Our philosophy is that everyone is creative. Given the tools and space to express ourselves, we all have something to say through self-expression.”  They plan to let the family story continue to organically unfold while letting the space evolve and become what it wants over many years.

Formerly in the Simplicity by i-elle space, the couple has been working on construction and changes getting ready to open the weekend of Spring Equinox. They will swing the doors open Friday night through Sunday if you are in the area. The grand opening called Cosmic Kiss will be virtually and in-person on Sunday, May 1.

Join us for dreaming into the future of this uniquely creative space.

Visit us at Musette Atelier and Museum: 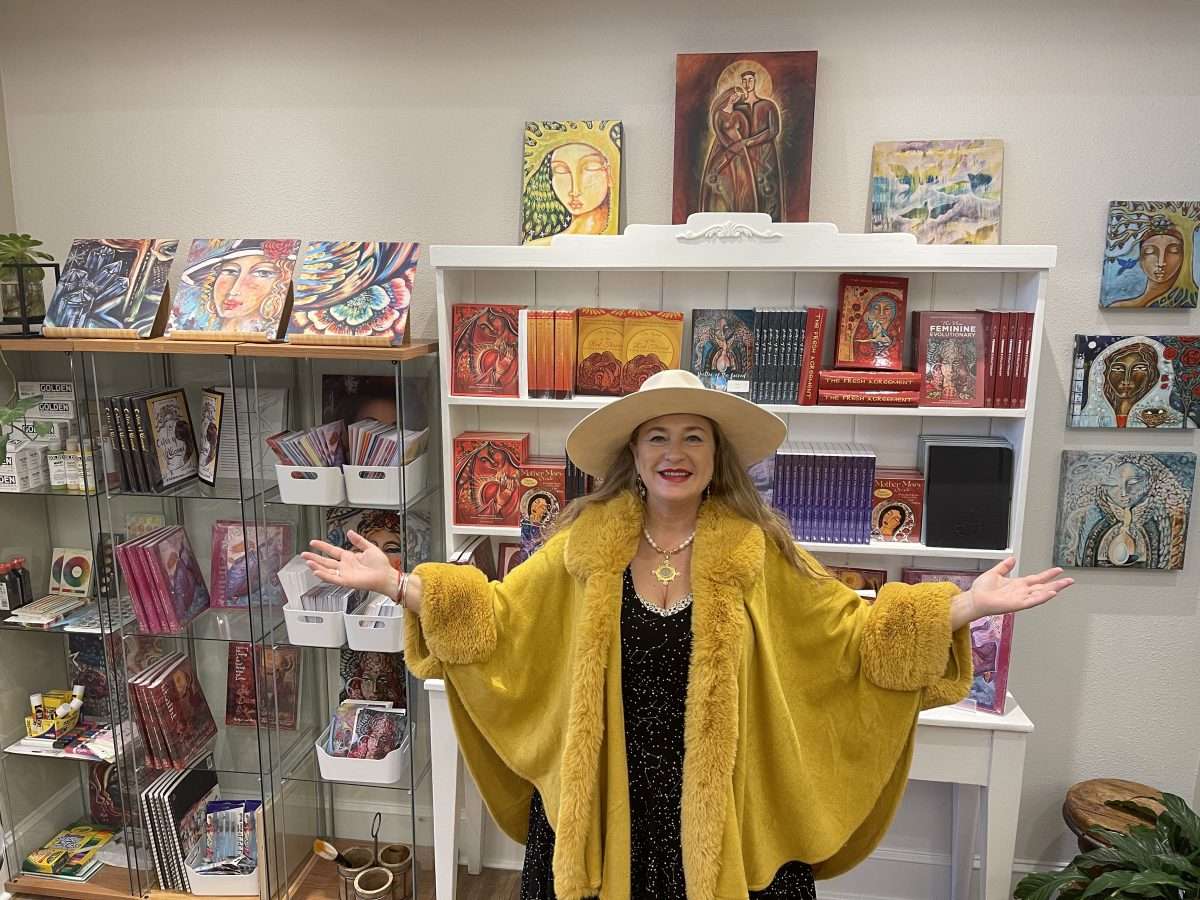 Come visit us from 2-6pm this Friday, Saturday, and Sunday, March 18th – 20th. The cozy ambiance awaits your senses! 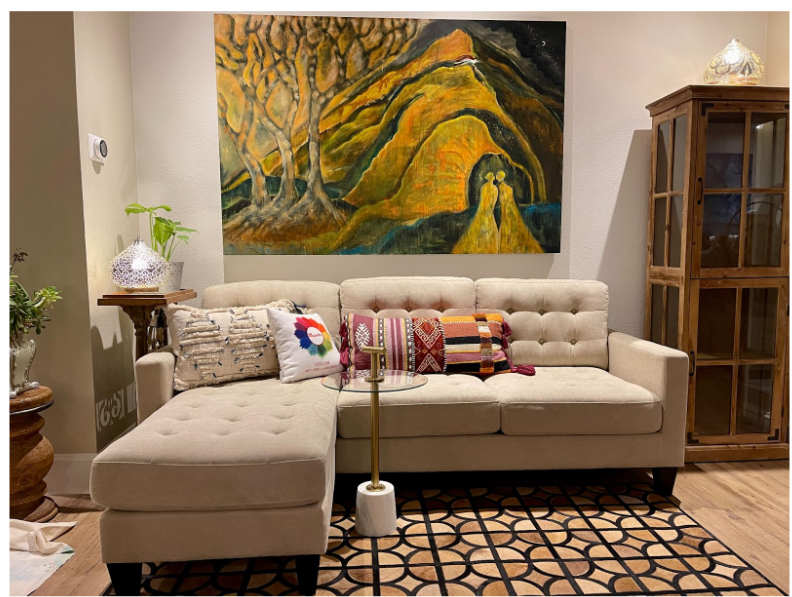 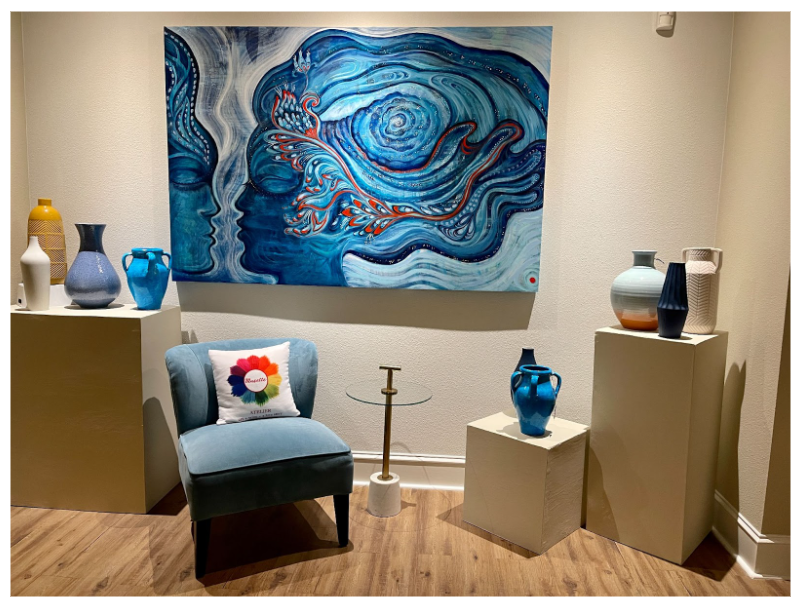 MUSEA – Center for Intentional Creativity® is a living Art Museum and School. MUSEA is home to an inter-generational and multicultural collective of emerging and experienced creatives, healers, and leaders. The MUSEA community is a global art movement dedicated to self-expression as a method for consciousness and compassion through the arts. The Intentional Creativity Arts Guild of MUSEA-Certified educators and curators offer engaging arts programming across the world co-curating art exhibits and online classes and in-person experiences.

For more than two decades MUSEA has nurtured an Intentional Creativity cultural framework rooted in the teachings of a matriarchal art lineage of storytelling and images. Intentional Creativity is an inter-disciplinary practice weaving creative arts, sciences, somatics, transpersonal psychology and archeo-mythology. A core premise is that creativity is a basic human right that enables every person to know how they think, feel, and therefore act.

MUSEA extends an invitation to all beings to live with connection and intention by choosing to bring love and awareness into everything we create and our relationship with the universe. Together we can remember the past, live in the present with intention and dream the future.

About the Author: Jessica Richmond